A recent post by Sports Chosun has gone viral online, revealing a 2015 girl group ranking that was created by a series of music entertainment experts.

According to experts, which consisted of several officials from various Korean agencies, Girls’ Generation, 2NE1, and SISTAR are the top girl groups of 2015 with a star power of “Undefeatable.” Closely following behind them with increase in the ranks by 0.5 is Girl’s Day, who rose up the ranks in 2014 with hits “Something” and “Darling.”

In the ranking of “National,” Apink rises to the category. The A Cube Entertainment girl group stole the hearts of fans with “Mr. Chu” and recently “LUV,” which won a plethora of music show awards in addition to an all-kill. Following closely behind with a huge march up the ranks by 2.5 places is AOA, who made headway in 2014 with “Miniskirt” and later “Like A Cat.”

Other groups who made the list include SECRET, f(x), 4MINUTE, and KARA in the “High Society” ranking, EXID, miss A, and 9MUSES in “Mania Level,” T-ARA, Dal Shabet, Crayon Pop, and Hello Venus in “Borderline Popular,” and finally, BESTie, MAMAMOO, Red Velvet, G-Friend, and SONAMOO in “Upcoming Candidates.”

Check out the ranking below: 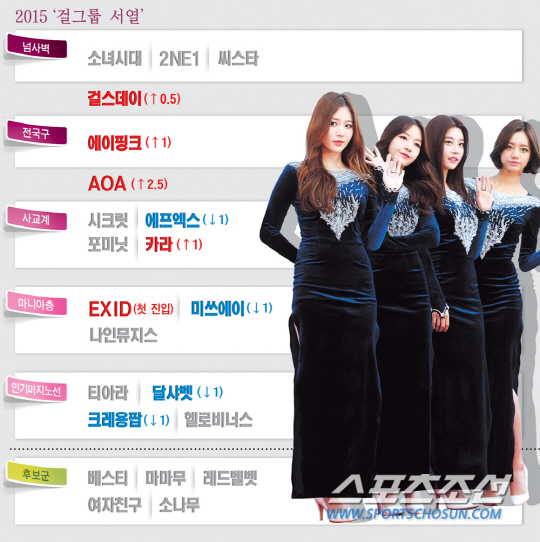