Along with the words “jungkook look” he posted a link to his newest music video.

It’s no secret that Jungkook admires Charlie Puth, as he covered his song “We Don’t Talk Anymore” and stated several times that he would love to collaborate with him one day.

Charlie has acknowledged BTS and Jungkook’s cover, and has sent lots of love their way via Twitter. 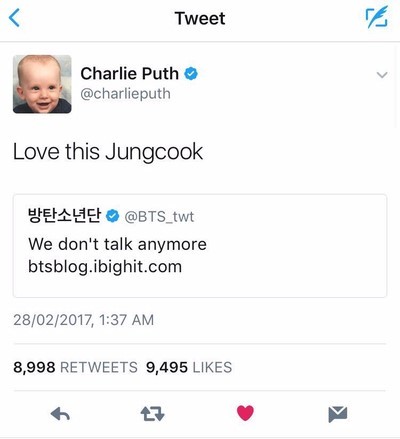 Korean fans seem to be excited by the tweet from Charlie, as they know Jungkook is a huge fan of his and view it as the result of BTS’s international popularity.

“My thoughts as to why Charlie Puth mentioned Jungkook.
1. To tell him to do a cover
2. Just to show off”

“When our Jungkook does an interview, he asks ‘Is Charlie Puth coming too?’ and mentions Charlie Puth when asked which artist he wants to collaborate with. But Charlie Puth really called out Jungkook’s name… Jungkook, do you see this?”

Some Korean news outlets have reported positively on the tweet as well.

the fact tht jungkook actually appreciates charlie and makes time to cover his songs only for charlie to use him for clout to get more views and attention is just :(( sigh jk deserves better pic.twitter.com/j83CJtpREn

charlie puth using jungkook’s name to get views on his mv hhh can y’all maybe not? I ruled him out the day he talked about how impressed he is by bts’ clout rather than complimenting them as artists

Many fans are referring to a previous interview Charlie did in which he raved about BTS’s huge social media following before stating he’d like to collaborate with them one day.

firstly, he literally.. LITERALLY admitted that he only wants to collab with bts for ther ‘social following’ and huge fanbase🗿 pic.twitter.com/Lz5mD8sEpZ

“They’re massive, I want that social following…Me and Shawn Mendes are like how do we get that kind of fanbase? I’d love to collaborate with them.”

Several Korean fans and international fans are now defending Charlie Puth in the wake of these accusations.

“Charlie Puth’s personality controversies, he already gave feedback on that. Right now, international fans made a thread [about the situation] and now the situation is getting bigger. How bad would Charlie Puth’s fans feel? It’s a singer that Jungkook likes so let’s not do this. As the fandom grows bigger, there are times I don’t understand ARMY.” — @jin__hopes

ya'll better stop attacking charlie puth like what ya'll did to wale do ya'll remember how we got namjoon so dissapointed bc its his idol and jungkook would probably feel the same dont jump to conclusions and bts is not those kind of ppl who lets others to use them for clout,,