On the May 11th installment of KBS‘ Hello Counselor, the older sister of a 24-year-old man expressed her concern over her younger brother’s undying love for INFINITE‘s Sung Jong. The two siblings had appeared on the show to seek advice for a personal problem of theirs, to which the sister identified as her brother’s extreme love for Sung Jong.

She said, “I’m concerned over my younger brother who has fallen into extreme love.  He says, ‘Jjong (Sung Jong) is only my angel.’  Jjong is neither his girlfriend, nor his family, nor his dog, nor his friend; he’s an idol member.  Not even a girl group member, but INFINITE’s Sungjong. Seeing as how a 24-year-old has fallen for not a girlfriend but a male idol, I am worried as his older sister.”

“First thing in the morning, my brother wakes up to an INFINITE alarm, then he goes onto Sung Jong’s SNS to see what he’s doing, and he even has posters.  When I leave work and arrive home, in addition to talking about himself, he talks for hours about Sung Jong.”

In his defense, the younger brother spoke up, recounting how he fell hard for Sung Jong as his bias in INFINITE, “When I was in the military, I really liked a song, INFINITE’s song. There was a person who shined like a flower in the group and that was Sung Jong.  In addition, I think that Sung Jong has both cute and manly charms.”

After hearing his story, Secret’s Hyosung tried to win over the brother’s heart by saying, “If you’re 24, you’re in the age group that would like me. Do you not like noonas? I also have a lot of surprising charms.”

However, he didn’t fall for her efforts as he maintained his loyalty to Sung Jong, replying, “I like Sung Jong more. I don’t really like any girl groups.  I remember seeing Sung Jong in person last year at a little theater concert and it made me cry actually being able to see Sung Jong, the one I’ve liked all this time, in person.” 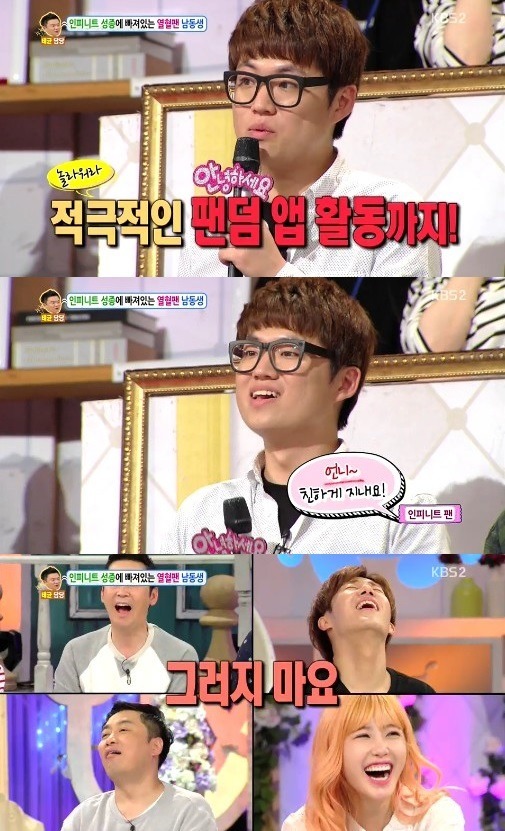 The Little “BTS WORLD” Girl Cried When She Had To Leave BTS, Here’s How They Comforted Her