Korean SONEs are infuriated at Korean SNL crew who burned and stomped on Girls’ Generation pictures/albums  during one of their skits.

The most recent episode of SNL featured Wonder Girls and the story of the skit was that the government put a ban on all idol groups that debuted after Wonder Girls. The SNL crew proceeded to burn and stomp on the albums and pictures of Girls’ Generation. 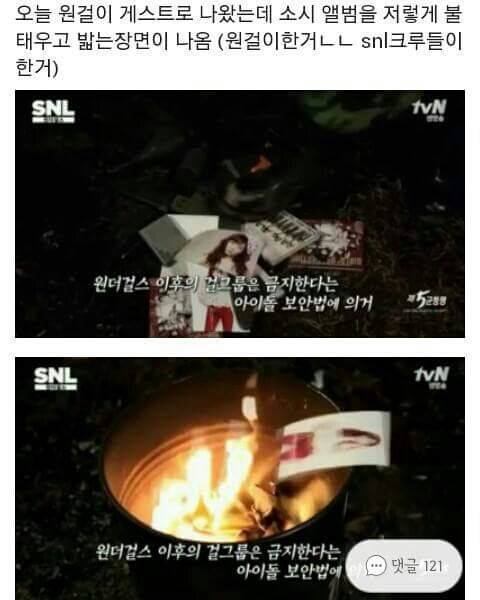 Fans were also infuriated by the fact that the skit said Girls’ Generation made it because Wonder Girls left Korea to promote in the United States.

“This is ridiculous because Girls’ Generation blew up with ‘Gee’ on January 2009 and Wonder Girls left for the USA in June 2009. SNL crossed a line with their ridiculous claims and rationality. Some people are saying that it’s stupid to be angry at a comedy program for such small things but this program makes light of all the hard word Girls’ Generation put in and makes it sound like they were just lucky to make it. Don’t we deserve to be angry?”

[+ 224, -13] Wonder Girls left to USA in June of 09 and Girls’ Generation made their comeback with ‘Gee’  in January of 09. But the writers made it sound like Wonder Girls would have been the top if they had not left to USA. Which fan would not be furious to see their bias’s picture burned on broadcast?? As a true SONE we would like to demand an apology from the producers of SNL..

[+ 198, – 16] I think it would be better to make a petition on their forums or speak to the broadcast itself to make them take action so SNL at least has to pay a fine.