Members of GOT7 have been seen sporting new hair colors, riling up IGOT7s for their summer comeback!

Photos of Jr. and JB first surfaced earlier this week with Jr. sporting a light brown hair color in contrast to his jet black hair from previous promotions while JB still has dark hair despite rumors of the two having platinum blonde hair.

Meanwhile, Jackson was spotted coming out of the JYP Entertainment building with a honey blonde hair color. He later appeared on broadcast during SBS’s Inkigayo causing many to call him “GOT7’s Amber” as his new hair color makes him look extremely similar to f(x)’s Amber.

In addition, GOT7’s maknae Yugyeom was spotted leaving JYP Entertainment as well with a washed out lavender hair color. He and main vocal, Youngjae, were spotted at Gimpo International airport on Wednesday, June 3rd with Youngjae sporting a jet black color in contrast to his platinum blonde hair color from “Stop Stop It” promotions. 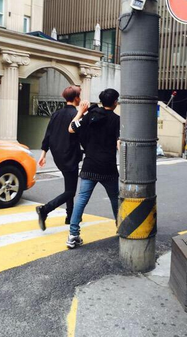 Mark‘s new white blonde hair was seen at the airport as well and his father, whom fans affectionately call “Papa Tuan,” tweeted photos of Mark’s new hair color on January 3rd, comparing him to Mark and Youngjae’s dog, Heart, which the members renamed “Coco.”

You two are perfectly match ^_^ pic.twitter.com/OKvGRxtYcH

These photos have IGOT7s excited for GOT7’s upcoming comeback. Despite running into music video production issues along with their labelmates and sunbaes, 2PM, GOT7 is said to be preparing for a summer comeback that will follow 2PM’s mid-June release. This will be GOT7’s first comeback since their first full length album Identify last November. Since then, GOT7 has been busy touring Asia and the United States with their GOT7’s first Fan Party and even performed at the Korean Music Festival in Los Angeles in May.