Early this week, articles and statements came to light, disproving the rumors that T-ara bullied former member Hwayoung – a sensitive issue that has followed T-ara’s history since her departure in 2012.

The photos that initially spurred on the bullying rumors were brought forward in a recent Pann post where the original poster put each of the supposed accusations in context. Koreaboo has translated the post below.

One of the most controversial moments was when Eunjung seemed to force feed Hwayoung rice cakes on a Japanese variety show. However, the screenshots below of the scene clearly illustrate that Hwayoung, Hyomin, and Qri were one team while Soyeon, Jiyeon, and Eunjung formed the second team.

The girls battled for the win through Wii games in hopes of attaining snacks and Hwayoung, Hyomin, and Qri won in the end. Eunjung was the lowest scorer on her team and was thus given the penalty chosen out of the penalty box – she had to hand feed snacks to the winning team.

When she feeds Hwayoung the rice cake, some netizens originally mistook it as forceful and thus spurred on the bullying rumors, however, the MC is clearly smiling in the background along with the rest of the members in a friendly atmosphere that was not at all a bullying situation as people assumed. Japanese Netizens pointed out that as they were more accustomed to the nature of their variety shows, it was clear that the girls were not bullying her at all. Hwayoung is even seen smiling with the group at the end of the broadcast.

There were also screenshots of Hyomin with Jiyeon in a playful headlock while Hwayoung held down Jiyeon’s hands and face, however, no rumors of Jiyeon being bullied were sparked because of the clearly playful intentions broadcast on the show. 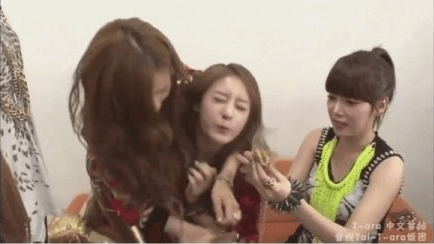 In another instance, during MBC’s annual Idol Star Athletic Championships, Hwayoung was seen sitting away from other T-ara members talking to Infinite’s Sungjong, which sparked suspicions T-ara excluding her from the group. However, in a zoomed out screenshot, it is revealed that she’s sitting near Qri and Eunjung while Jiyeon was participating in her match at the time.

Another fancam later surfaced where it seemed that member Boram was intentionally messing with Hwayoung’s umbrella while SHINee’s Key and Infinite’s L were looking at her with suspicion. 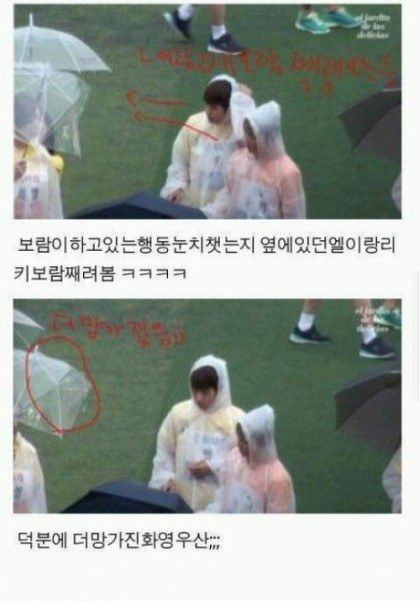 However upon further examination, it became clear that the fancam actually showed Boram putting an umbrella over Hwayoung’s head despite Hwayoung’s significant height difference with Boram.

Previously, Eunjung shed tears on popular show 4 Things when she talked about the bullying incidents saying, “Among all the truth that the public knows, not all are always true.”

With the increasing reports discrediting the bullying accusations, many netizens have responded saying “Instead of seeing only what you want to see, it’s important to know what really happened.” Many have echoed the sentiment with a grain of salt as they recognize that there was discord between Hwayoung and the T-ara members.