Korean male actors Won Bin and Go Soo are two of the hottest actors in the country and are highly praised for their extremely handsome looks.

In an “Appearance Battle of the Century: Won Bin vs Go Soo,” the title of the Pann thread posted by a netizen on November 29th, they posted various photos of both actors from graduation photos to their short and long hairstyles photos, asking others which of the two actors was better looking.

Won Bin, who married actress Lee Na Young earlier this year, rose to popularity in 2000 after starring in the drama Autumn In My  Heart. Other films he is known for include Taegukgi, Mother, The Man From Nowhere, and more. He and his wife are expecting their first child, announcing the pregnancy in August 2015.

Go Soo is known for his roles in Piano, The Chaser, Marrying A Millionaire, My Fair Lady, and more. He married his non-celebrity girlfriend Kim Hye Yeon in 2012 and have a son and daughter together.

[+71, -2] I noticed how handsome Go Soo was after seeing a photo of him at Yoo Ji Tae’s wedding 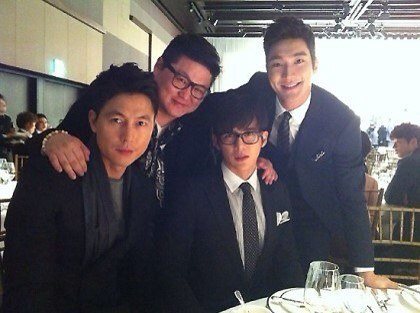