Netizens discuss each reasons on why idols and groups receive hate and criticism.

There are thousand of reasons on why each idol or groups get hated and receive criticisms for. Starting from small incidents on television or posts on their SNS accounts, it seems that netizens and anti-fans can’t wait but to find reasons to hate on idols. But which are the most notorious reasons on why certain idols and groups received criticism?

Originally posted on Pann, netizens discuss the compilation of reasons on why each idol or groups received public scrutiny.

Titled “Reasons on Why Idols Received Criticism,” here is the direct translation of the post and comments below.

“I’m basing this post on how many of those hate posts had likes or dislikes on them. Also based it on if they got more criticism for what they have done or received less than what they have done. I have only organized the incidents that were the most controversial.

1. BTS – This is a group that I really worry due to the overly excessive hate they receive. They just get hate for everything. One of my posts in the past concerned on all of the hate they received with no reasons.

2. iKON – They received hate for no reasons starting from before their debut and their promotions. People started to judge them from performances and tried to spread rumors that they were unsuccessful after their debut.

3. IU – There was one incident but I guess people started to judge her a lot more afterwards. People put dislikes on her posts for no reasons now. It feels like she would get dissed for breathing.

4. BIG BANG – I think their fandom goes through much trouble than others. Anti-fans always attack them personally and I have seen so many posts become top posts. But then once you go in them, I don’t know why they receive such hate. I felt sympathy for them.

5. Lovelyz, Red Velvet- People always criticize their visuals. I feel as though peoples’ standards are so high.. If these girls are ugly and fat, then all of the people shouldn’t be living. Especially Kei and Joy gets attacked. I guess the most popular members are mentioned first.

6. INFINITE, SHINee – There are so many nicknames in insulting them. They always get mentioned when netizens are bored. I don’t know why but people insult them for no reason at all.

7. Girl’s Day – Besides one mistake concerning them on Afreeca TV, people always insult their looks. I’ve seen so many posts that attacked them as women.

8. Taeyeon – I don’t know why she got insulted for her short hair. After capturing bad photos or videos, they always try to reveal her ‘true personality.’ They claim that she is a fox and a b*tch. She should be on the top as well as I think of it.

Other idols – No reasons. What are reasons to be hated for.

Of course if idols deserve criticism, they should be receiving it so they don’t make the same mistakes.

But people hate them for no reason and that saddens me.

There is a Korean saying, ‘you could hate the crime but don’t hate the person.'” 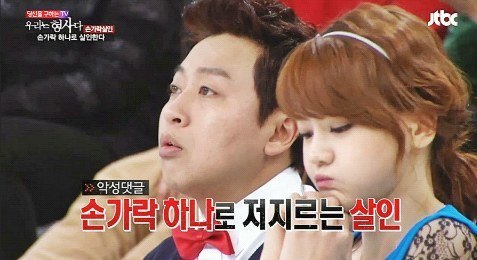