Netizens discuss after series of photos of EXO Chanyeol and Red Velvet Joy hint they have feelings for each other.

After series of photos emerged from the last stage of July’s SM Town concert in Japan, netizens are talking about a potential relationship between EXO Chanyeol and Red Velvet Joy. In series of photos, Chanyeol is seen looking at the direction of Joy while his superior and hyoung Heechul is playing around with her. Chanyeol initially looks at the direction of Joy until he realizes Heechul is gone and Joy looks back towards Chanyeol. But once Heechul comes back to Joy, Chanyeol is seen taking steps back to take a picture with another member.

By looking at these awkward interaction between the two, the fans and netizens have speculated that some type of relationship has formed between EXO Chanyeol and Red Velvet Joy.

Originally titled “Evidence of Chanyeol and Joy In Some Type Of Relationship,” here is the direct translation of the post and comments below.

“I don’t know what was happening but Super Junior Kim Heechul kept teasing Red Velvet Joy of something. Then, he tells Suho who was next to them something and makes fun of Joy together. But if you take a closer look at the photos, Chanyeol is seen continuously looking somewhere as if he was bothered. Chanyeol was seen playing around with Baekhyun but still kept looking somewhere. When I took a closer look to where he was looking at, he was looking at the direction of Heechul making fun of Joy. Then, he starts move to the direction of Joy and Heechul as if he was finding out what was happening? 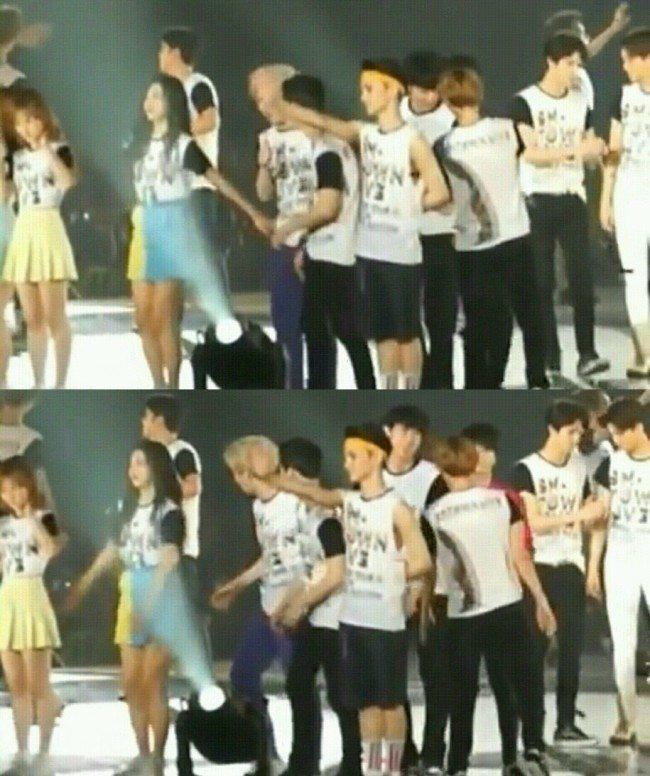 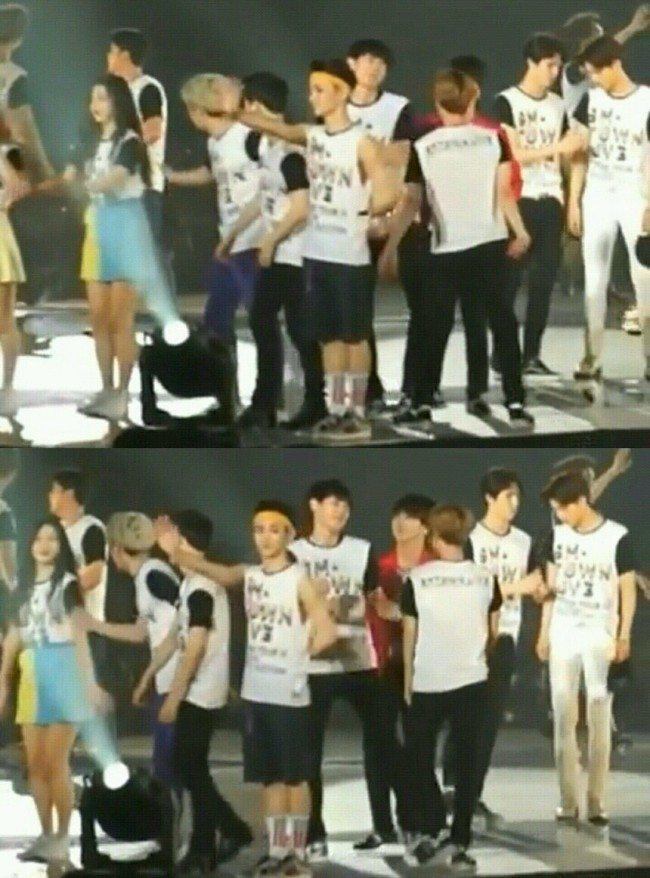 “Chanyeol is seen playing around in the back” 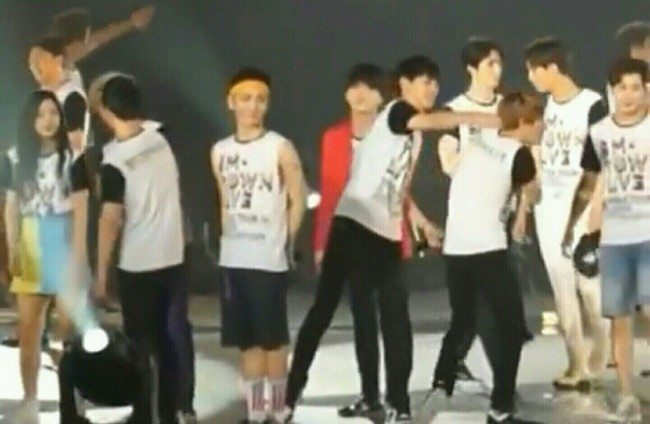 “Heechul tells Suho something and then they start teasing Joy together” 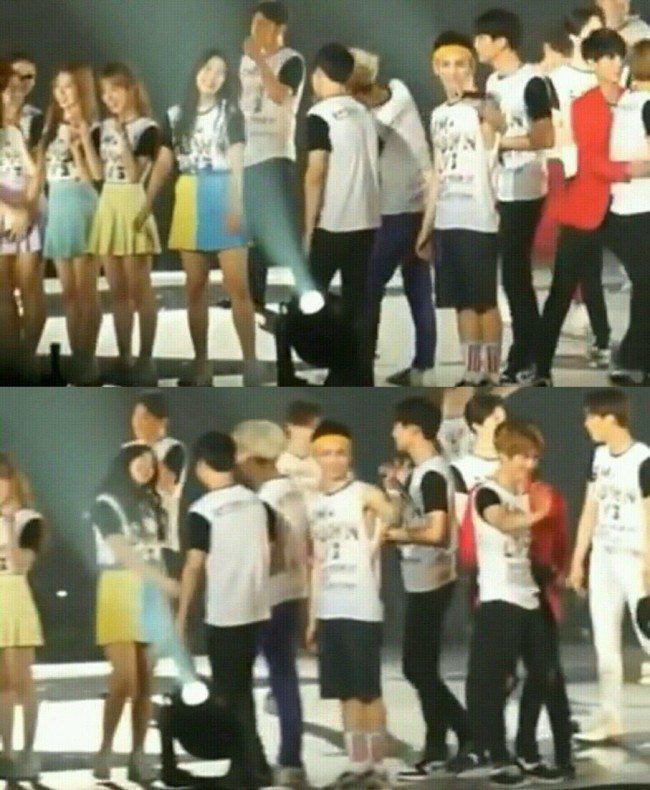 “While Heechul and Suho are teasing Joy, Chanyeol is seen looking towards their direction” 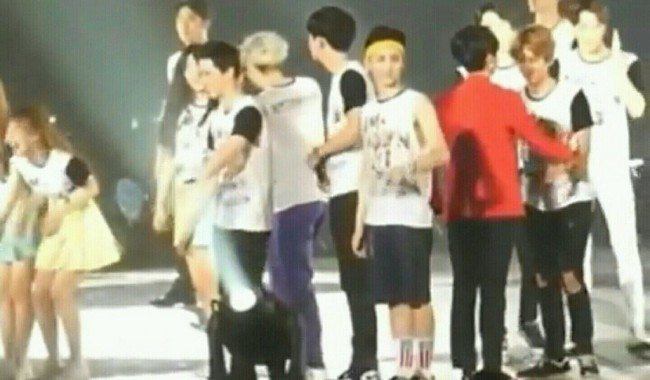 “Chanyeol starts to make his way towards Joy” 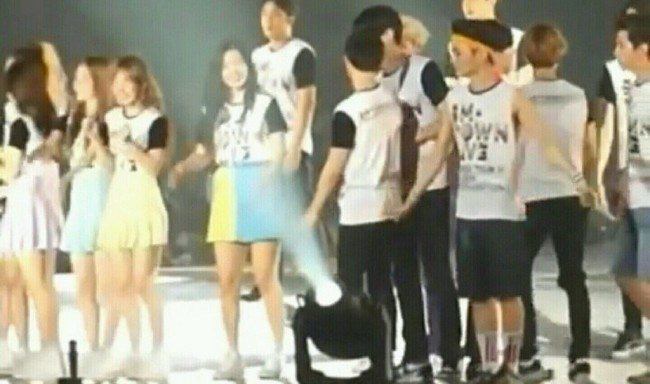 “Chanyeol comes closer to Joy to see what is going on” 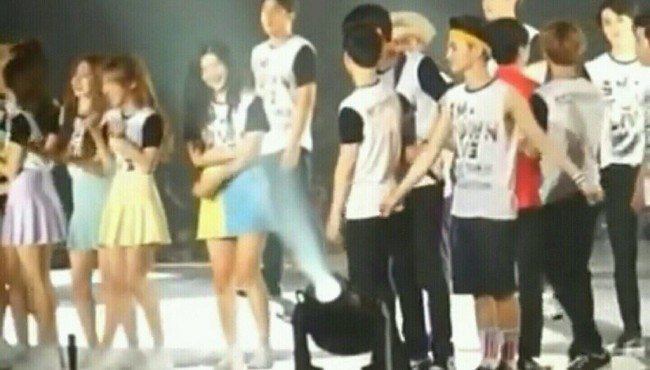 “2. Kim Heechul comes back to tease Joy again but this time, he asks Suho to join him. Kind Suho starts doing it and Joy just laughs and plays along since they are older and they are her superior in SM.

But you can see Chanyeol is bothered and keeps looking at the direction. Then, he comes towards them.” 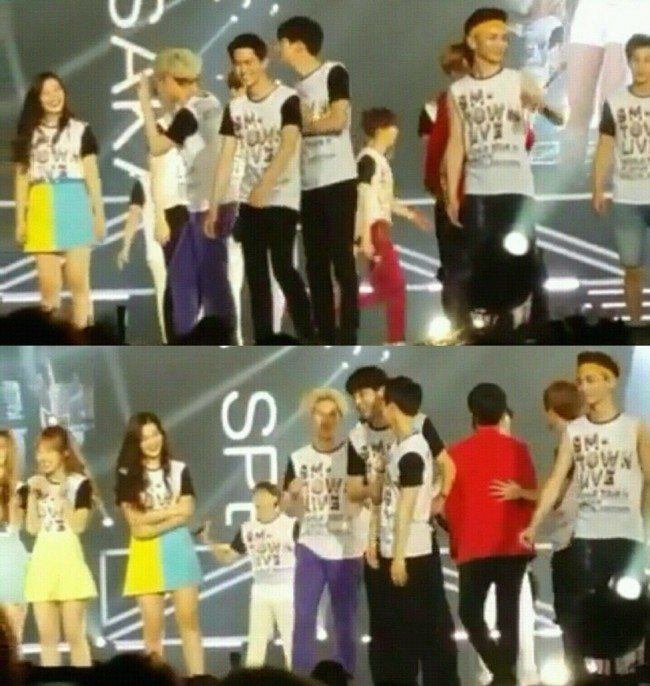 “3. Joy is spotted looking back at someone and then turn around and smiles. And then suddenly, Chanyeol starts to come towards her.. But then all of a sudden, Heechul comes back to Joy so Chanyeol takes a selfie with Baekhyun. The direction of the selfie however is facing where Joy is. It felt like Chanyeol was still bothered by something. After Heechul goes somewhere else, Chanyeol makes his way right next to Joy and then starts talking with Suho.” 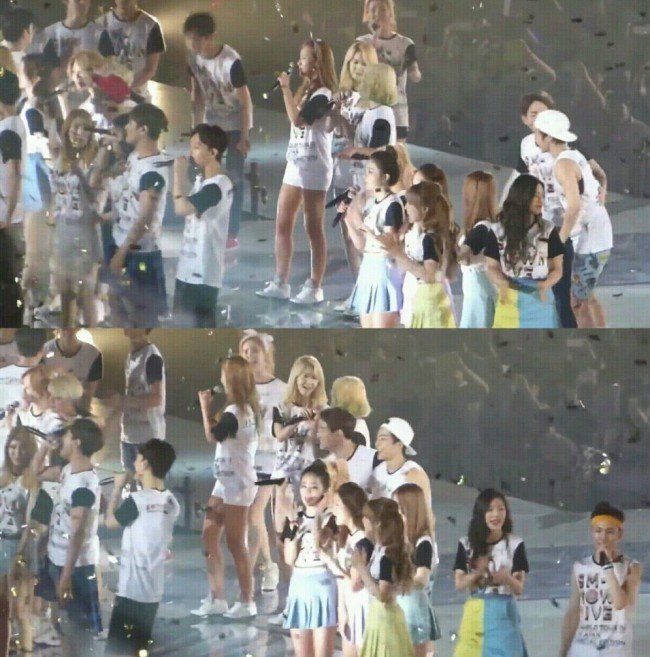 “Joy looks back at someone and turns back smiling” 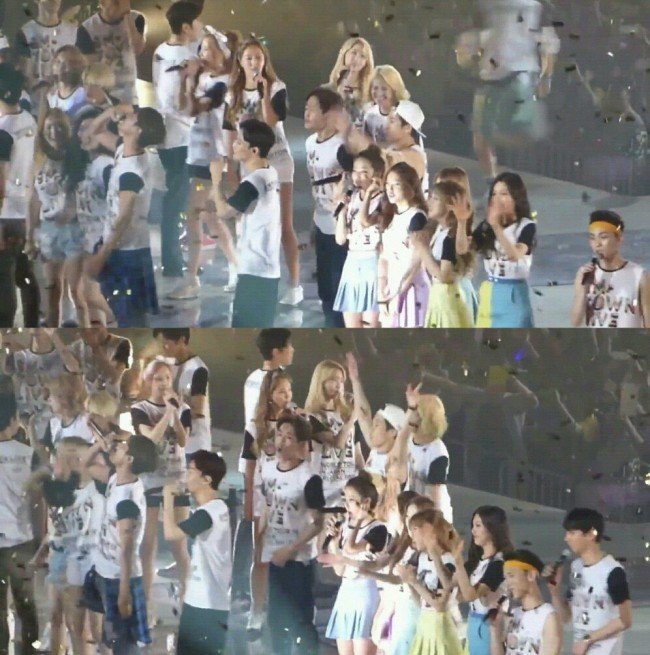 “Chanyeol reappears next to Joy” 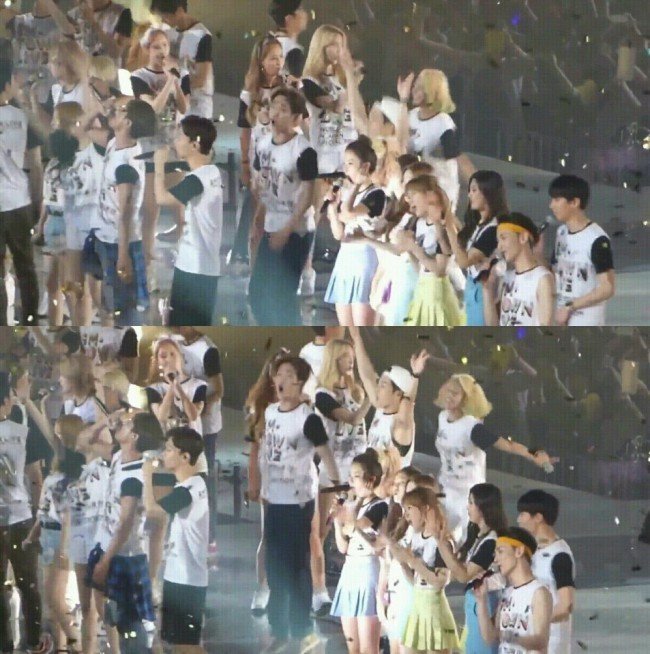 “After approaching Joy, he stands next to her” 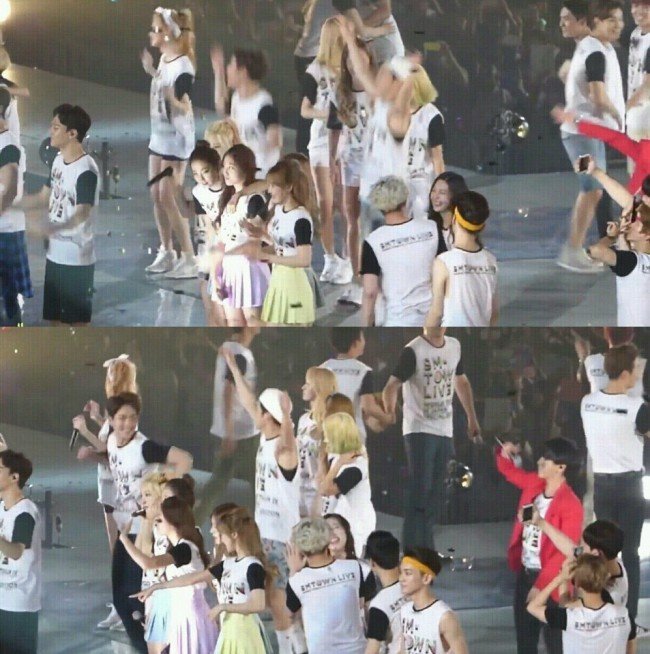 “But then Heechul reappears next to Joy” 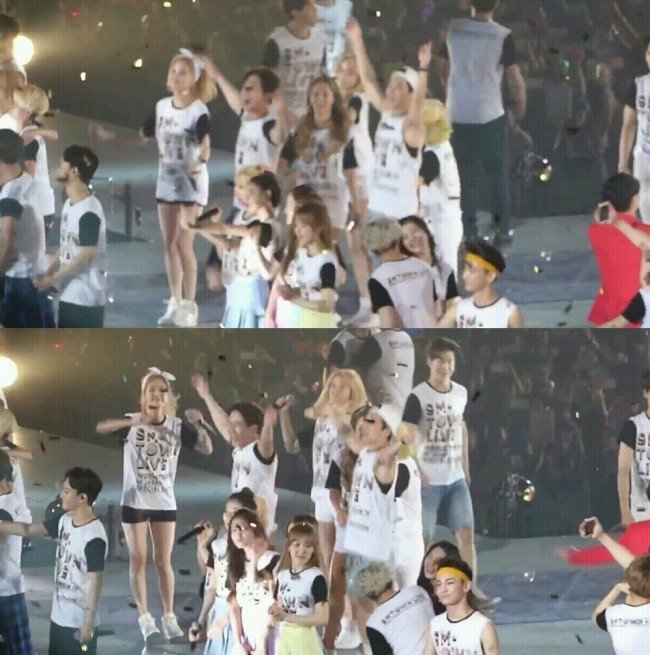 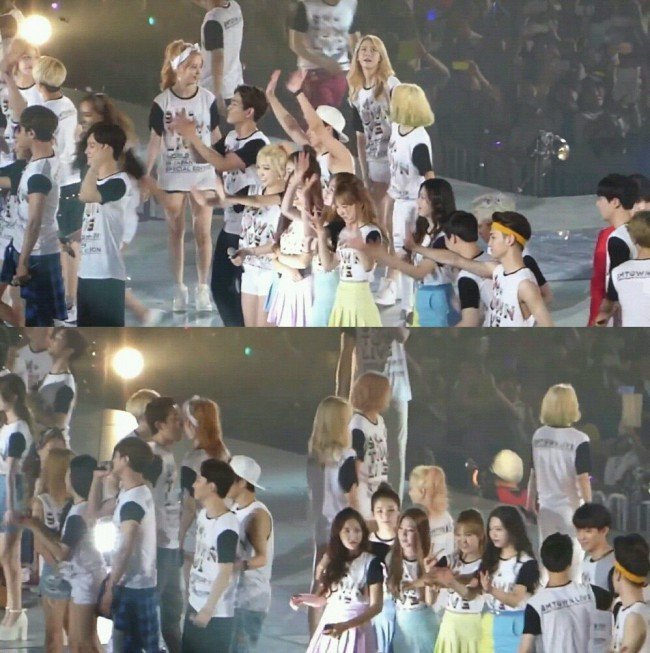 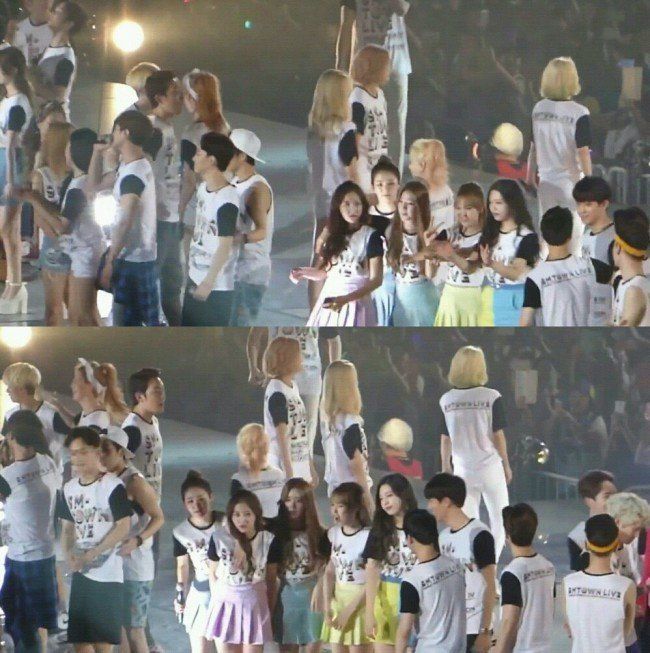 “Chanyeol stays by Joy’s side”