In addition to being an incredibly skilled rapper, iKON‘s Bobby has also been praised for being a talented lyricists as well.

However, the YG Entertainment singer has recently been accused of plagiarizing another artist’s work. According to a post on Pann, the lyrics to iKON’s “Anthem” sounds eerily familiar to a song by a rapper named JTONG. After seeing an example of similar lyrics, many netizens agreed with the post and criticized Bobby for claiming the lyrics as his own. 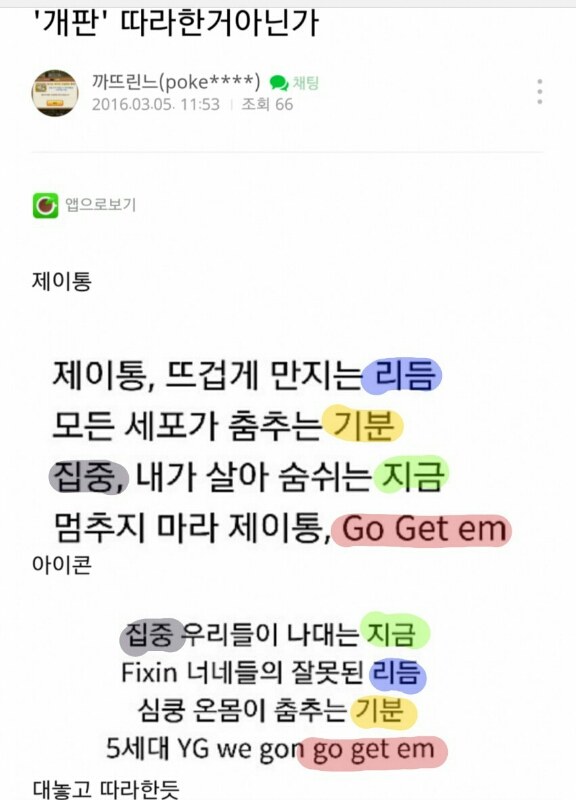 Jtong
“Jtong, stroking that hot rythm. The feeling of every cell dancing. Focus on the now that I’m living. Don’t ever stop Jtong, Go Get em”

Bobby
“Focus on the now that we’re partying up. Fixin everybody’s wrong rhythm. Heartattack the feeling of my entire body dancing. 5th gen YG we gon go get em”

[+ 477, – 231] Even when he swears he looks fake hip-hop…He seem like a kid going through puberty trying to act strong. Why’s he so proud giving people the finger

[+ 450, – 194] Bobby’s always been this way. He disses idols from small companies but he’s always so submissive towards idols from big companies. He plagiarizes too ㅋㅋㅋㅋ pathetic

[+ 151, – 82] This is exactly the same ㅋㅋㅋㅋㅋㅋㅋㅋㅋㅋㅋㅋㅋ He just did it counting on his fans to protect him it seems