Enraged fans caused “F*ck Mnet” to trend on Twitter following Mnet‘s removal of the official performance video and re-uploaded another version of EXO‘s “Love Me Right” from YouTube earlier today.

Mnet deleted the original “Love Me Right” performance video, which had well over 700,000 views from YouTube before re-uploading the video but effectively erasing all of the view counts from the video.

EXO-Ls had tirelessly worked to promote their group’s video, raising the view count to over 700,000 views in just two days in order to help EXO in their battle to win Mnet’s M!Countdown, which takes into account YouTube views in the scores to determine the winner. Unfortunately, the video now only has approximately 150,000 views, at the time of writing.

Many fans have started to point fingers at Mnet, claiming that the company deleted the video on purpose and that they have also blocked many fancams from the performance. 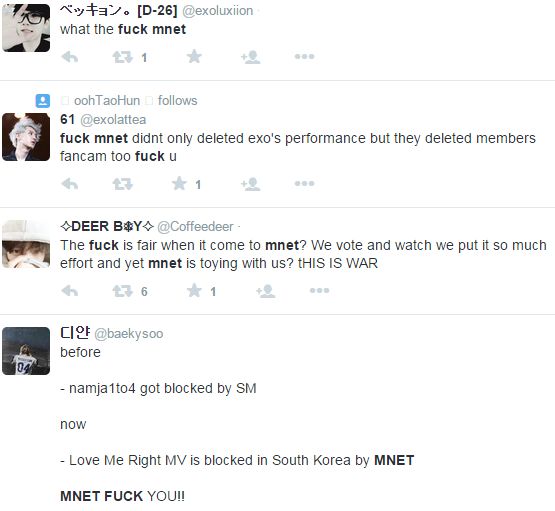 Check out the reuploaded version below:

GOT7’s Jay B Might Have Been Bullied Into Chopping Off All Of His Hair, But He’s Proving He Can Rock Any Style