EXO-L were furious at the Idol Athletic Championship after hearing news of Xiumin‘s injury, so understandably netizens expected the same reaction toward the athlete who caused the injury.

However, after seeing comments from EXO fans on UFC fighter Kim Donghyun‘s Instagram account, netizens were incredibly surprised by how nice they were. Instead of criticizing or threatening him, fans of the SM Entertainment singer and his group consoled the athlete, telling him that the injury wasn’t his fault. Many fans also thanked Kim Donghyun for taking care of Xiumin afterwards as well. 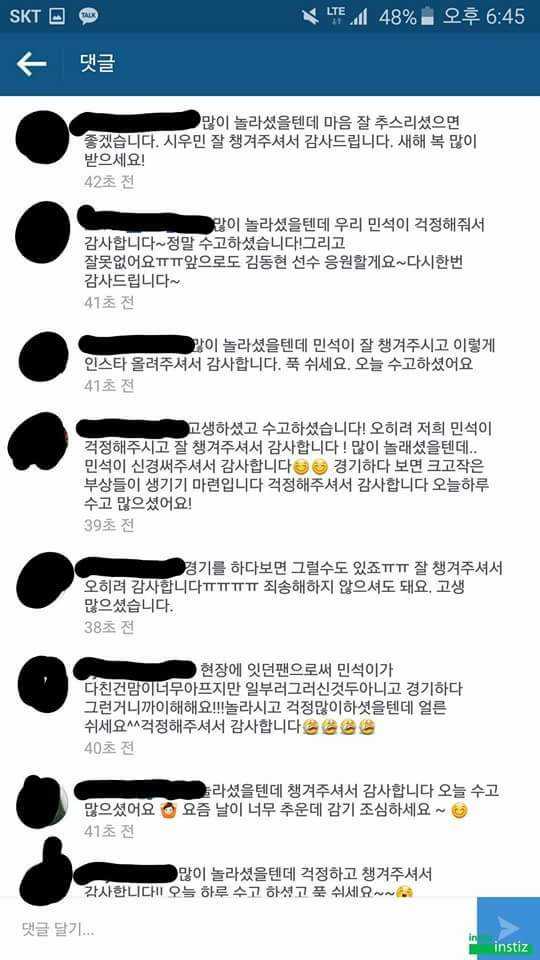 “I’m sure you were extremely surprised I hope you have composed yourself well. Thank you for caring for Xiumin I wish you a happy new year.”

“I’m sure you were very surprised. Thank you for worrying about our Minseok~You did well! And you’re not to blame I am cheering for you Kim Dong Hyun~Thank you again”

“You must have been so surprised thank you for taking care of Minseok and updating us on your Instagram. Rest well.”

“You worked hard and did! Thank you for caring and worrying about our Minseok! You must have been so surprised. Injuries are a part of sports you did well today!”

“It happens during sports ㅠㅠ Thank you for taking care of him ㅠㅠㅠㅠ you don’t have to be sorry.”

“As a fan who was there I am very sad that he got hurt but you didn’t do it on purpose it just happened during a game and I understand!!! You must have been worried sick you should rest up ^^ Thank you for your concern”

“You must have been extremely surprised too and we thank you for taking care of him. It’s getting cold these days be careful you don’t catch a cold”

[+ 293, – 10] Why is this a surprise..there were a lot of thoughtless fans during Growl but EXO-L are full of mature people. During I am Korea EXO-Ls even made fans and gave it out to people. The fandom is huge so there are some immature fans but I think a lot of them left with the 3 Chinese members leaving. I’m not an EXO-L but I like EXO-Ls.

[+ 266, – 23] It was always so frustrating because EXO-Ls never criticized anyone without a reason. People just judged them how they wanted ㅋㅋ they were always kind. It’s good that our image has changed with this issue.