Many awards to given out to many veteran groups and rookie groups at the end of the year music award ceremonies. Although many fans cheered on their favorite groups, netizens and fans agreed that most awards were received by well-deserved groups.

However, there is a rookie group that is being discussed on whether they deserved such awards or not.

Originally posted on Pann, netizens discuss on whether a rookie group deserves the 2015 awards as well as if they deserved to be considered a priority over other groups from their agency.

Titled “2015 Unlikable Award Goes To This Rookie Group,” here is the direct translation of the post and discussion below.

“They didn’t even do anything in 2015. They just gave awards out this year to MONSTA X just to give them something” 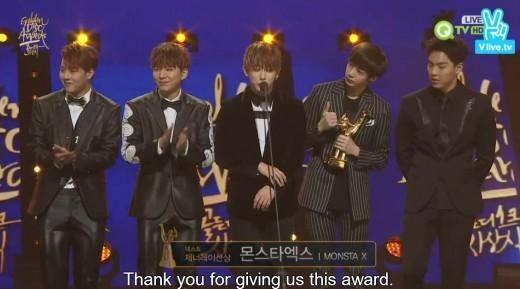 [ +157 / -41] Starship Entertainment is helping these guys out more than Boyfriend. They got a next generation award instead of the rookie award. What is this.. They are just making up awards just to give them something.

[ +36 / -4] I mean they’re not bad but they sucked which means they didn’t deserve the awards.. It is the power of their entertainment

[ +32 / 0] Isn’t this the group with members that smoke and drink? hahaha I don’t like them because of that but I guess they deserved the award for working hard

[ +27 / -6] Haha me too.. When I saw them, they didn’t have talent, looks and have bad personalities. (They told Jimin something in program Radio Star) I don’t know why Starship Entertainment is helping them a lot